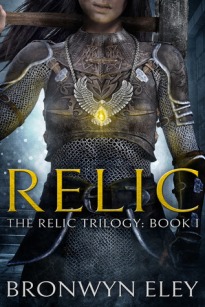 In the city of Edriast, there is no deadlier duty than to serve as the Shadow.

As the personal servant of the powerful Lord Rennard, the Shadow’s life is all but forfeit. Rennard possesses one of five rare and dangerous Relics – a jewel that protects his bloodline, but slowly poisons everyone else in its proximity. When the current Shadow succumbs to its magic, nineteen-year-old blacksmith Kaylan is summoned to take his place.

It’s an appointment that will kill her.

As the time Kaylan has left ebbs away, hope begins to fade… That is, until she discovers a plot to destroy all five bloodlines in possession of the Relics.

A rebel force plans to put an end to Rennard’s rule and Kaylan suddenly finds herself embroiled in a cause that might just be worth fighting for. But no cause is without its costs…

As her life hangs in the balance and rebellion bears down on Edriast, Kaylan must decide where her loyalties lie – and how she’ll leave her mark on the world.

Relic is the absorbing first novel in The Relic Trilogy, a thrillingly dark YA fantasy series.

I received an e-ARC of Relic from Talem Press in exchange for an honest review, all thoughts and opinions are my own. I was really intrigued by this one when Talem Press reached out to me. It sounded like a dark fantasy that I would enjoy, and it did not disappoint. Also, the cover is gorgeous and the relic is one it so it helps with the visualisation.

Overall, I enjoyed reading Relic and am looking forward to reading the second one next year, hopefully. This book is perfect for fans of dark fantasy with a badass female protagonist. The romance isn’t the main focus of the plot, so if you don’t like romance in fantasy, this one is good for you since it’s subtle.